Among the Commedia dell’Arte masks, Harlequin comes from Bergamo, Balanzone from Bologna, Pulcinella from Naples… and Pantalone from Venice. All of its story speaks of this city, starting from his job: he’s a merchant. 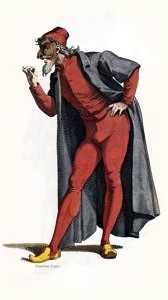 Just as the origins of many other masks, Pantalone’s roots date back to the Latin comedy, namely to the character of the old man. During the 16th century, indeed, he was a rich old man, though greedy, and with a weakness for young women. This made him an enemy of the young, as well as a laughing stock.

His personality was just as stern as his looks: the mask has a hooked nose and extremely prominent eyebrows and is matched by a costume with contrasting colours: socks, trousers and cloak are red, whereas the cape and zimarra – a long cassock used by men since the 15th century – are black.

It was only when the sharpest features of the Commedia dell’Arte began to be smoothened, that Pantalone gradually changed and developed into a good, grave and a bit melancholic. It’s Goldoni, though, who has the final say on this development.

From Goldoni’s point of view, Pantalone has indeed stern manners toward his family, but he’s the guardian of traditions, as well, and, as such, of Venice, which he sees slowly sinking into corruption.

Pantalone: the history of the name

Why is Pantalone Venetian and why is this his name? Because Venice imported an intense veneration of a Saint from Nicomedia – now İzmit, in Turkey – from the East. Saint Pantaleon was physician to the Emperor Galerius and became a martyr in 305, during the Diocletian persecutions.

His martyrdom is represented on the ceiling of the church of San Pantalon in Venice, just a few steps away from Campo Santa Margherita. This is, though, no fresco, but rather a painting on a huge canvas, more than 400 square metres wide. Rebuilt in the 17th century, the church was first erected in the 11th century: this Saint was therefore first venerated many centuries before his name became a mask’s name. Even prior to that, though, Pantalone was how Venetians were nicknamed. Thus Pantalone is the emblem of Venice, and he was loved by Venetians because he embodied their fondness for adventure, trade… and traditions. 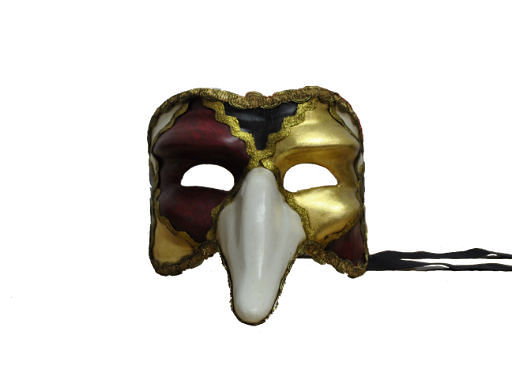 One of Kartaruga’s Pantalone masks