In the dead of night, as the legend goes, a horde of damned knights rides through the skies galloping off with their hounds, hunting something they’re doomed never to find. At its head rides a king who, according to the culture, may be Odin, king Arthur, Charlemagne… or a certain Hellequin.
Now, the big question is: how does one turn from head of a gang of damned souls into the quintessence of buffoonery?

The history of Harlequin

It all started with a name, Hellequin, count of Boulogne, who was apparently killed by the Normans in 882. The legend on his death was so famous that in France the wild hunt was renamed as “Hellequin’s gang”, a phrase which appears in many French texts of the 11th century.

The Hellequin thus developed into one of the devils of the French medieval mystery plays. But, as some writers show, in the 13th century Hellequin and his chaotic group were not sees as terrifying damned souls anymore, but rather as comical devils.

From Provence, Harlequin finally landed in Italy, too. More precisely in one of the circles of hell. The Hell is Dante’s Inferno, where the demon is italianized as Alichino. In Dante’s world of horror and torture, Alichino and his fellow demons are comical elements, because they turn out to be stooges. Dante too therefore proves that Harlequin has changed through time. In his personality, at least, since the same cannot be said for his mask.

The costume and mask of Arlecchino 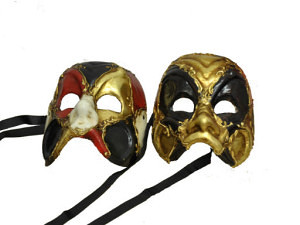 Two of Kartaruga’s versions of the mask of Arlecchino

The half mask of Arlecchino is undeniably the most fiendish of the masks of the Commedia dell’Arte: its ominous sneer, its raised eyebrows and its colour – black -, give it a touch of the devilish, which acts as a reminder of Harlequin’s origins.

The costume, on the other hand, reveals the changes this mask has gone through: at first, it consisted in a medley of different rags, the only things this servant, poor as a church mouse, could afford. Only later did his clothes become more close-fitting and made up of red, green, blue and yellow lozenges.

After his first appearance as a coward and constantly famished servant in the second half of the 16th century, by the 18th century Harlequin had already developed into something else: into the wily and greedy page of an aristocrat. He thus kept his stunts and jests, but also grew closer to his own origins.