There’s only one woman among the masks of the Commedia dell’Arte, but it’s a character with its own personality, not a mere Lover: we introduce you Colombina.

Colombina mask in the Commedia dell’Arte 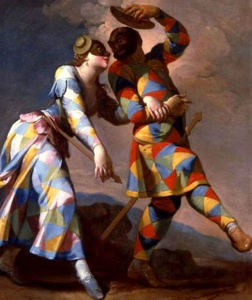 Colombina made a name for herself as a mask of the Commedia dell’Arte quite late, namely in the 17th century, in France. Her name, though, appeared for the first time in 1530 in Italy, in the texts written by the Accademici Intronati of Siena (the “stunned Academicals”). After digging a little deeper, one finds out that her roots lie in Latin comedy: in Plautus’s comedies, for example, female slaves turn out to be naughty and always prone to suggest a ruse to their mistresses.

The Soubrette of the Commedia dell’Arte has a variety of names: Corallina, Smeraldina – as, for example, Carlo Goldoni calls her in his Servant of Two Masters, The Man of the World and other comedies -, Franceschina, Ricciolina… and, sometimes, Arlecchina.

Indeed, just like Harlequin she is a servant, but this position of hers does not prevent her from being straightforward, saucy and, most of all, shrewd. She is therefore both witty, always apt to deceit and tattle, and able to stand up to the advances of her master, Pantalone – and to keep her boyfriend, Harlequin, in check, too, since he can’t resist women’s charm.

She is, though, not only bound to Harlequin because of their relationship, of personality traits and of her name (sometimes), but rather because of her costume, as well.

As a matter of fact, Colombina often wears the same costume as Harlequin, namely one made of multi-coloured lozenges and, though it isn’t 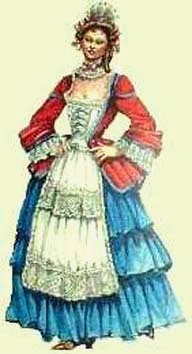 always there, her mask  is usually black and covering only her eyes. But her dress can also consist of a wide blue skirt, a bodice, a red jacket and a white apron, whose pockets hide the love messages of and for her mistress.

In short, she really is a vain mask, always taking great care of her own look, but she has a strong personality, too. Maybe this is her only chance of survival in the world of the Commedia dell’Arte, which is absolutely a men’s world. And her cunning and toughness surely make this mask a modern one. As well as a side-splitting one.